What To Know About D Color Diamonds

Color is one of the most important aspects of a diamond's visual appearance. We tell you what you need to know about D color diamonds.

What Does D Color Mean? 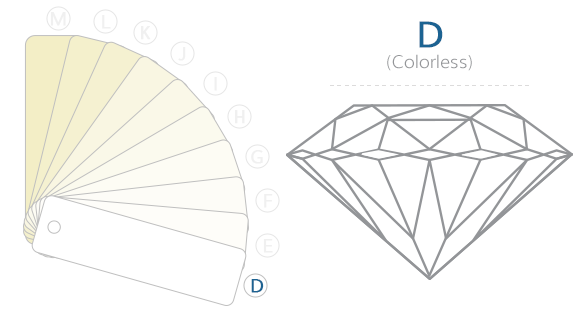 Why is D the highest color grade for diamonds?

If you’re like me you may find it a little strange that the color grades don’t start at A color. Before the GIA was founded there was a preexisting color scale that ranged from A to C. To differentiate themselves and avoid confusion, the GIA began grading diamonds on a scale of D – Z. Now that the GIA is recognized as the industry standard, other grading agencies have adopted the same color grading scale and the industry sticks to the D – Z range with D being the whitest and Z being the “most colored”. Beyond Z there are diamonds that are considered “fancy colored diamonds”, these do not receive a letter grading and the presence of color is actually treated as a positive instead of a detractor in this range. Basically, if you’re buying a diamond you either want it to be very white or have very deep or saturated color – typically colored diamonds are used for non-engagement jewelry but they can be used in unique engagement rings as well.

Is D Color Worth It?

Since D is the whitest of the diamond colors and is extremely rare, D colored diamonds are by far the most expensive. For perspective we’ll compare a few 1 carat round shaped diamonds with VS2 clarity to see how much more expensive a D colored diamond. At the time of this writing, the least expensive D color version on StoneAlgo was $7,491, however the cheapest G color was $5,973 which is 20% less expensive. The question you need to ask is whether the D colored diamond is worth this 20% premium. While G is considered to be near colorless, whereas D is considered colorless, the appearance of color is so slight that even a trained jeweler may not notice it unless the diamond is placed right next to a D colored diamond for comparison sake. So, a D color diamond is typically considered overkill in terms of color grade. We’d recommend you only consider diamonds in the near colorless spectrum unless you have an excessively large budget and are willing to get a much smaller diamond for your money.

Drop us a Line if you need further assistance!

There are a lot of moving parts but generally speaking we try to maximize carat size for our given budget by sticking to the lower end of the color ranges we specified and searching for VS2 or better diamonds. SI1 diamonds are great if they’re eye clean, but they are a pain to find and often end up costing just as much as a VS2 diamond would. If you need one-on-one advice, we offer free support to all our users – simply drop us a line at management@stonealgo.com

Make a better diamond buying decision with our tools.

Diamond Search : view all the best diamonds at once
Diamond Comparison Report: compare up to 4 diamonds
Diamond Details: a detailed write up on a GIA diamond
Total Diamonds with a Cut Score: 1.1 million+
Back to the Blog
Start Searching